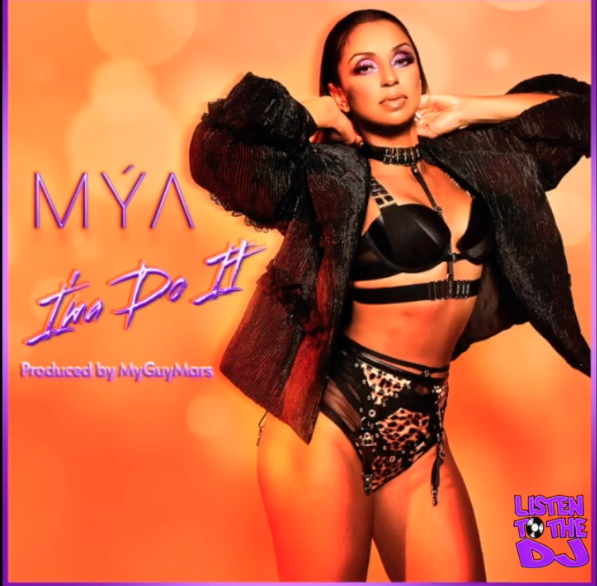 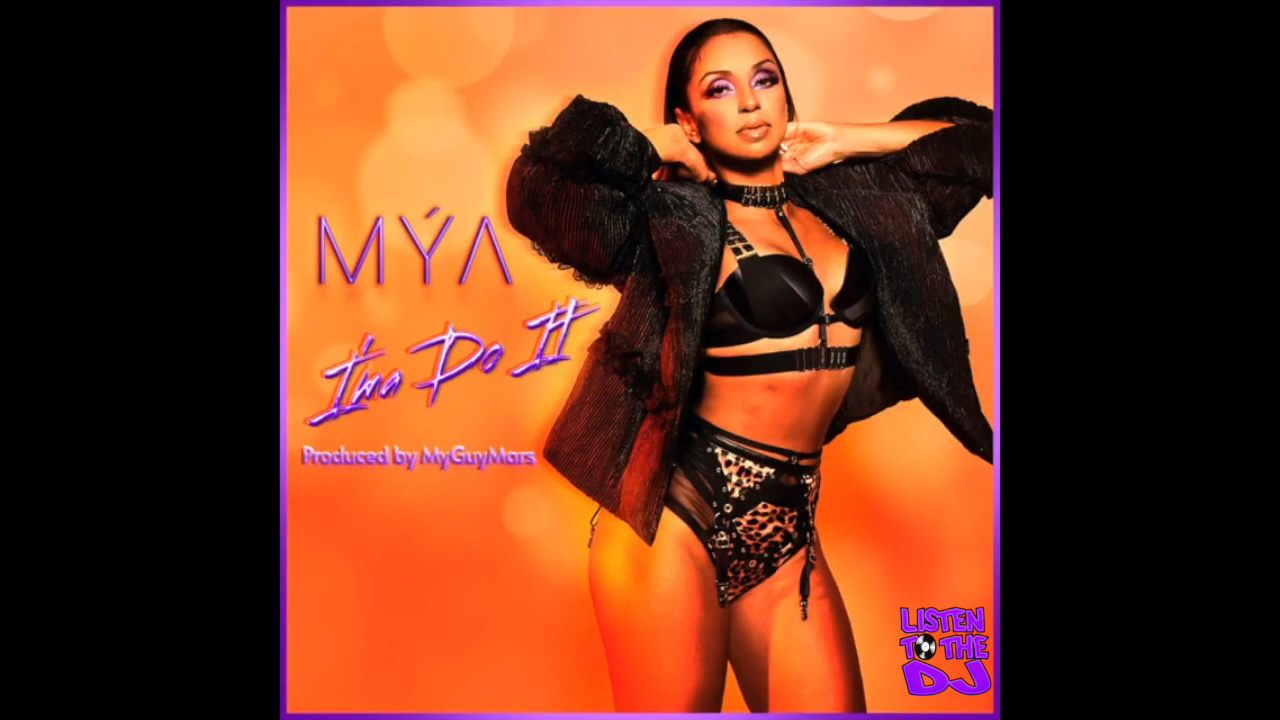 We just added a new Record to our Playlist by Washington DC native, Grammy Award Winner, multi-platinum singer, songwriter, producer, musician, dancer, choreographer, actress, activist and philanthropist Mya! The tune is titled “I’ma Do It” produced by My Guy Mars & released on Mya’s own Planet 9 Label! The Record is available for streaming & purchase here!

On February 14, 2020, Grammy Award Winning Artist Mýa celebrated 20 years in the music industry! Mýa released her self-titled, double platinum, debut album, Mýa, in 1998. The album launched the then 18-year-old Mýa into the fabric of pop-culture. Mýa featured the massively successful singles “It’s All About Me,” “Movin On” and “My First Night With You” “Ghetto Superstar” & “Take Me There.” In 2000, Mýa released her second double platinum album, Fear of Flying, featuring the hits “Case of the Ex”, “Free” and “Best of Me.” In May 2001, Mýa collaborated with Christina Aguilera, Lil’ Kim, P!nk and Missy Elliot on a remake of LaBelle’s “Lady Marmalade”, which is featured in Baz Luhrman’s “Moulin Rouge.” Selling over 5.5 million copies, it became the most successful airplay-only single in history and won the Grammy Award for Best Pop Collaboration and went on to collect numerous awards. In 2003, Mýa released her third studio album, the critically acclaimed, “Moodring”, featuring the hit singles including “My Love Is Like Wo” “Fallen” and the club circuit favorite, “Whatever Bitch.” “Moodring” also featured “Everything or Nothing”, the theme song for the 2004 video game James Bond 007: Everything or Nothing in which Mýa was featured as a Bond Girl, and “Real Compared to What” the 2003 Coca-Cola theme song, for whom Mýa was a spokesperson.

In 2007, due to her label Motown’s accidental leak of her 4th studio project “Liberation,” Mýa made the decision to part ways with Motown/Universal and began her own independent label Planet 9, in which she executive produced, self engineered, self funded & released 7 different compilations. “Sugar & Spice” 2008 (Japan), “The Perfect Edition” double disc 2009 (Japan), the first R&B/Hip Hop mixtape titled “Beauty & the Streets” Vol 1 in 2010, the album “K.I.S.S.” (Keep It Sexy & Simple) in Japan in 2011. In 2012, Mýa released the U.S./Canada & World editions of “K.I.S.S”., featuring “Fabulous Life”, which was used in the national #FashionByBravo ad campaign on Bravo/NBCUniversal and “Break Your Neck” featured in Ford commercial campaign.

In 2013, Mýa independently manufactured the limited Mint of K.I.S.S. for fans, and in 2014, began releasing a series of EP’s. The first EP titled “With Love” was released February 14th, Valentine’s Day marking the 16th anniversary of her first single “It’s All About Me” February 14th, 1998. On April 21st, she also released the “Sweet XVI” EP marking the 16th anniversary of her self-titled, debut album Mýa on April 21st, 1998. On February 14th, 2015, Mya released her 7th independent project “Love Elevation Suite” EP, consisting of all slow jams. Mýa speaks “I have recorded hundreds of songs in what appears to be a hiatus to some, so I’ve dug into my archive & independently assembled seasonal appetizers before the main course for my fans who are simply hungry for music from me.”

In 2016, Mýa released her 12th studio project/8th independent self executive produced Planet 9 project Smoove Jones on February 14th, available on myamya.com and all digital outlets worldwide with an exclusive release on Apple Music. The project is accompanied by a digital booklet, a 2016-2017 17 month calendar and vegan, organic Planet 9 wine available on myamya.com. In 2016, Mya also became the face of PETA’s Go Vegan campaign and Smoove Jones became nominated for a Grammy for Best R&B Album of 2016. On Dec 31, she completed her 2016 Planet 9 world tour in the Middle East.

In the first quarter of 2017, Mýa lead her 12 month raw vegan, vegan, vegetarian challenge with fans on Instagram, treating 1 winner per quarter to personal time with her both domestically & internationally. In January, Mýa toured Australia and other territories of the world through July. On February 13th, Mya attended the Grammy Awards as a nominee for best traditional R&B album “Smoove Jones” executive produced by Mýa via her own label Planet 9. On February 14th, 2017, a popular date for her releases, Mýa released the music video to a fan favorite “Coolin’” from her Smoove Jones project, followed by gracing the “Women Set Free” March issue of Contrast Magazine New York in which 25% of profits are donated to One Pulse Foundation and Mercy For Animals magazine in March. In late July through early September, Mýa completes filming a 6 episode TV series titled “5th Ward” premiering March 2, 2018 on Bob Johnson’s new network UMC (Urban Movie Channel) umc.tv. Followed by a digital audio single release titled “Ready For Whatever,” In October, Mýa treated fans with the “Ready For Whatever” music video reaching over 2.5 million views. In November, Mýa released Ready Part II (Bedroom Mix), inspired by 90’s R & B. Mýa also recorded “Let There Be Light” with music legends such as Dionne Warwick and Gladys Knight for Feeding America, as she also focuses on relief efforts for Texas, Florida, Mexico & Puerto Rico while simultaneously working on her 20th anniversary project through the new year, due in 2018.

In 2018, Mýa released her 20th anniversary album with the sexy, sensual 3rd digital audio single “You Got Me” on February 14, 2018, commemorating the 20th anniversary of her sassy debut single “It’s All About Me” ft. Sisqo (1998). Followed by a more traditional soulful R&B slow burner single “Damage,” Mýa treats fans with her musicianship in composition with vocals ranging from delicate to powerhouse in delivery and the final single, a super soulful instant grat track “Knock You Out” written by Marsha Ambrosius & Mýa, available April 13th, followed by the release of the full length album “T.K.O” (The Knock Out), executive produced by Mýa & MyGuyMars on April 20, 2018, commemorating the 20th anniversary of her debut album (1998) and tour dates listed on https://myamya.com/previousevents T.K.O Music Videos consist of  “Ready For Whatever,” “You Got Me,” “Damage,” “With You,” and “Down” from the T.K.O. Album, followed by a summer fun record “G.M.O.” (Got My Own) featuring female singer & rapper Tink.

In 2020, Mýa released a music video for “The Truth” a fan favorite from her Love Elevation Suite EP on Valentine’s Day,  and “You Got Me Part II” audio single on 4/20, paying homage to her 90’s R&B roots, influences and fans. On April 25, the “Fear of Flying” Expanded Edition Album was released by Universal Music Group on its 20th Anniversary. with “Case of the Ex” appearing on HBO’s “Insecure” Episode.  On May 29th, Mya released “Space & Time” a Louis York Production, which speaks to the climate of the world today.  Amidst the pandemic, Mya is focused on completing her 10th independent project & album, whilst delivering new virtual experiences with her fans platforms from charitable meet & greets, personalized video messages, online concerts, conducting her annual vegan challenges with coaching on IG Live.  A music video for “Space & Time” will be released late July.

“It’s truly been an an amazing, educational & humbling journey these past 22 years in the music business & I am truly grateful for every experience, encounter & everyone who has been a part of this ride.  My passion & love for music has never been greater and I can assure you, I am just getting started and the best of me has yet to come.  Super excited to finally serve you the next full course meal! Love you all!”

In addition to becoming a finalist on “Dancing with the Stars” Season 9, her further work in television can be found on “NCIS”, “1-800-Missing” (Canada), “Haunted” and “Sister Sister.” Her filmography includes the world renowned “Chicago”, for which she won a Screen Actors Guild Award, “Shall We Dance”, “Havana Nights: Dirty Dancing II”, “In Too Deep”, “Heart Specialist”, “Cursed”, “Cover”, “Penthouse”, “Love for Sale”, “Metrosexual”, the Sci-Fi film “Dark Rising” (Bermuda Tentacles) with Linda Hamilton, voiceovers for the MTV animated film “Mountain High”, a cast member on VH1’s “Girls’ Cruise”, the new documentary “They’re Trying To Kill Us”, and a starring role on the first and second seasons of the TV series “5th Ward”. 5th Ward season 2 is slated to be released July 30, 2020.

As a philanthropist, Mýa continues to devote her time and resources to various causes. From 1998 to 2001, she became the spokesperson for Secret to Self Esteem. In 2005, Mýa founded TMATF: The Mýa Arts & Tech Foundation, a nonprofit organization dedicated to providing disadvantaged youth growth and opportunity through arts & technology education, in which she serves as both executive director and teacher. Mýa is also an advocate of breast cancer as her mother is a 22 year survivor.  She’s collaborated with the Lifetime Television Network in the Stop Breast Cancer for Life campaign, recording “My Bra” a song sold on iTunes donating 100% of proceeds to breast cancer research, participated in numerous Revlon Run/ Walks, Susan G. Komen & Habitat for Humanity charitable events, S.O.M.E. based in Washington, D.C., providing the homeless with meals, shelter & assistance. In 2007, from the Global AIDS fight, to aiding homeless LGBT youth via Skool’d, to advocating equality with the NOH8 campaign, Mýa also ran the 26.2 mile NYC ING Marathon to raise funds for the world’s largest no-kill animal shelter & organization, North Shore Animal League America in 2011.  Mýa has partnered with the Human Rights Campaign for their #LoveConquersHate campaign and currently serves as celebrity ambassador for Africare addressing health, economic development, women’s empowerment & youth engagement. She’s also participated in Campaigns with Peta, Mercy For Animals, Million Dollar Vegan, Animals Asia

Download our Listen to the DJ APP Android IOS